Home » Wi-Fi Installed Base Forecast to Reach 17 Billion by 2030, Driven by the Smart Home 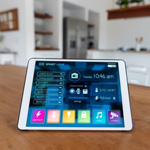 Penetration of Wi-Fi devices in the home is growing consistently and is being pushed to ever greater heights by smart home devices that use Wi-Fi, according to a Wi-Fi installed base forecast from Strategy Analytics. Almost 5 billion Wi-Fi devices are in use in homes worldwide and that number will reach 17 billion by 2030, researchers said.

The report, titled “The Wireless Home: Assessing the Scale of the Global Home Wi-Fi Device Market,” found that 802.11ac accounted for three-quarters of device sales this year. Wi-Fi 6, which recently has been introduced, will be used in one-third of sales by 2023 and will become dominant later in the 2020s. 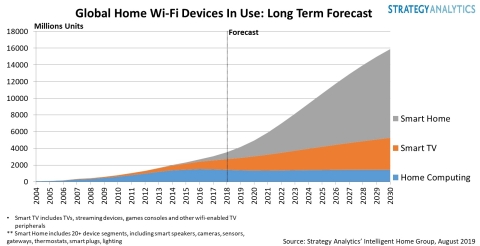 The third wave of WiFi-enabled devices include smart speakers, smart appliances, video cameras and thermostats, according to the report. The first waves were home computing devices (in the early 2000s) and smart TV devices (in the 2010s).

Indeed, it is a changing environment. “The shape of the wireless home is constantly evolving to meet changing consumer needs and expectations,” David Watkins, Strategy Analytics’ Director of Connected Home Devices, said in a press release. “Wi-Fi technology has adapted well to these requirements over time and looks set to remain the dominant platform for in-home internet connectivity for many years to come.”

The smart home category shows such constant and strong growth because it has both large building blocks and niche opportunities.

On one end of the spectrum are the big categories. These continue to grow. For instance, Charter communications said in June that it is offering Charter Apple HomeKit security to Spectrum subscribers. On the granular side, Comcast recently added a filter to its Xfinity Home camera that enables subscribers to track movements made by their pets. The feature utilizes artificial intelligence.