Economic models are all about the assumptions, and that applies to analyses of what should happen as additional spectrum is made available to U.S. wireless providers. Specifically, policymakers looking after the “public welfare” must make choices that could affect the amount of consumer benefit.
The problem, as with virtually everything in the global mobile business or the global fixed network business, is the business terrain between monopoly on one hand and multiplicity on the other. Most policymakers globally have concluded that monopoly is, in fact, a poor way to encourage innovation, efficiency and lower prices.

On the other hand, a simple spreadsheet exercise will be enough to convince anyone that the mobile or fixed network communications business, when conducted in a facilities based way, simply cannot support lots of contestants.

Whatever you might suppose total demand is, when multiple providers start to divide up that demand, markets can become ruinous, meaning no contestant gets enough market share and revenue to sustain itself.

The Phoenix Center for Advanced Legal & Economic Public Policy Studies long has argued that the sustainable number of network-based contestants in either the wireless or fixed network business will be limited to just a few firms, for this reason. 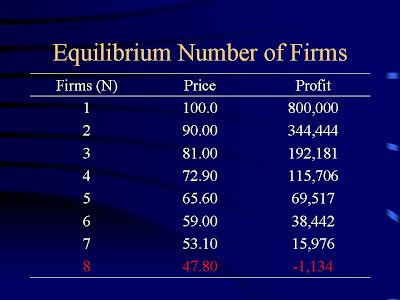 Phoenix Center Chief Economist George Ford now argues that consumers actually would be better off if any future wireless spectrum auctions allow all wireless providers to bid, rather than trying to ensure that spectrum assets are allocated more broadly.

This might seem counter-intuitive. If competition is better than a monopoly, shouldn’t broader spectrum awards create more competition, and therefore lead to more innovation and lower retail prices?

That’s the argument the Phoenix Center takes on in a new study. There are two key assumptions.

“First, we assume that price falls as the number of competitors increases (e.g., the Hirschman Herfindahl Index or “HHI” falls),” says Ford. “More formally, we assume Cournot Competition in Quantities.”

In other words, the Phoenix Center uses the same framework as the the Federal Communications Commission and the Department of Justice, where it comes to assessing market concentration and the impact of competition on retail prices.

A second key assumption is important, though. The Phoenix Center does not assume the amount of capacity from spectrum is not linearly related to the amount of spectrum a firm has.

That is, if we double the amount of spectrum, then the capacity provided to a firm from that additional spectrum more than doubles. That might be a head turner, at first. After all, are we not dealing here with laws of physics?

My apologies to Dr. Ford if I misapply the assumption, but here’s how I’d explain it.

Yes, laws of physics do apply. But wireless networks routinely “re-use” spectrum. A single physical allotment can be used repeatedly across a network, with a primary determinant being the coverage size of each cell. Lots of smaller cells can use a single amount of frequency more efficiently than a few big cells.

But cutting the cell radius by 50 percent quadruples the number of required cells. And since each cell represents more capital investment, you see the issue. Spectrum does not linearly relate to effective end user bandwidth. The amount of actual bandwidth a network can provide is related to the amount of spectrum re-use.

“Richer” providers can better afford to create the denser smaller cell networks, so can provide more bandwidth from a fixed amount of spectrum.

Wireless Competition Under Spectrum Exhaust provides the detailed model, but the point is that a smaller number of new spectrum recipients creates more effective end user bandwidth than a larger number of new recipients. That seems counter to reason, and the analysis is important for suggesting the “common sense” understanding is wrong.

The important public policy implication is that rules to “spread the spectrum awards to more providers” has a negative impact on end user pricing. In fact, a more concentrated distribution should lead to increases in supply that more effectively lead to lower prices.

It is not what most might assume is the case. The policy implication is that it is not helpful to restrict the ability of any contestants, especially the dominant contestants, from acquiring more spectrum in new auctions.

One might note that bidding rules in some countries, such as Germany, do in fact limit the amount of spectrum the dominant providers can acquire. Though the Phoenix arguments are about upcoming policy for U.S. spectrum auctions, the same analysis should apply in all markets.