Sometimes we forget how fast the communications, Internet and device industries have solved problems that seemed intractable just several decades ago.

Between 1995 and 2000, the world’s population rose by about eight percent. Meanwhile, the number of fixed network phone lines rose by 50 percent, and the number of cellular mobile subscribers by over 1000 percent.

But nothing like that was happening in the 1970s and 1980s. Writing in 1999, Geoffrey Kirkman noted that half of the world’s population had never made a telephone call.

To be sure, even in the domestic U.S. market, there have been huge changes in the affordability of communications Consider the huge changes in long distance rates, for example.

Despite the persistence of widespread poverty, the use of mobile telephony in African countries in the last few years has grown more rapidly than in any other region in the world. There are now an estimated 500 million mobile phone subscribers across the continent compared to 246 million in 2008.

Keep that in perspective. Less than 20 percent of Africans have electricity. Less than two percent have fixed telephone lines. And sub-Saharan Africa has just 350,000 kilometers of roads,
far less than the U.K., an area 1/100th its size. But nearly 75 percent of all telephones in Africa are mobile phones,IBM notes.

By late 2010, Africa exceeded Western Europe in terms of the number of mobile connections. The point is that stunning progress has been made in the area of enabling voice usage by most people on the planet, a goal that might have seemed almost insurmountable a few decades ago.

Broadband, computing and Internet access now have taken the place of the older concern about access to voice communications.

Keep in mind that, just a few years ago, five of the the six billion people on Earth did not have access to computing or the Internet. But that is changing very rapidly, as well.

Although Africa, for example, lags in terms of other forms of computing and communications usage with an estimated 100 million Internet users, between 2000 and 2011 the growth of Internet usage in Africa exceeded 2,000 percent, which is more than five times that for the rest of the world.

Some 2.4 billion people across the world now use the Internet on a regular basis, at least once a month, from home, school, work, or any other location using a PC or a non-PC (mobile) Internet access device, Forrester Research says.

This is expected to grow to 3.5 billion by 2017, representing nearly half of the 2017 overall world population of 7.4 billion.

In some countries – mostly developed economies, such as the US, the UK, Japan, Germany, Sweden, and the Netherlands – Internet penetration as a percent of the overall population is very high; more than 80% of the population are regular Internet users.

In other, mostly emerging markets – such as Brazil, Russia, India, China, Mexico, Indonesia, the Philippines, and Nigeria – Internet penetration ranges between 10 percent and 50 percent.

A key point to note is that while higher PC penetration has driven the adoption of Internet in developed economies during the past two decades, faster mobile penetration in the emerging economies is helping increase the Internet population, thanks to “mobile-only” Internet users.

The point is that the communications, Internet and device industries have made impressive, almost unprecedented strides over the last decade. 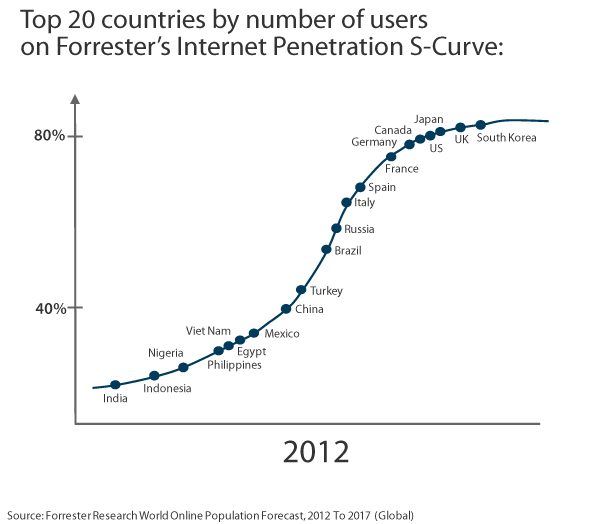