U.S. consumer technology revenues will rise 1.3%, to $286.6 billion retail and $224 billion wholesale in 2016, according to a consumer tech forecast from the Consumer Technology Association (CTA). Growing uptake of Internet of Things (IoT) technology and consumer enthusiasm for new electronics devices will fuel the rise, CTA highlights in a press release.

The five largest categories of consumer tech products – smartphones, tablets, LCD television sets, laptop and desktop computers – will drive most of this year’s gain, accounting for 51%, or $114 billion, of 2016 consumer tech product revenues, according to CTA’s ¨U.S. Consumer Technology Sales and Forecasts.¨

“We’re in the midst of a critical transition period, as more IoT products offer the anytime/anywhere access and seamless experiences that today’s consumers want and need,” said CTA president and CEO Gary Shapiro in a press release about the consumer tech forecast.

“This is a pivotal point in consumer technology history, as emerging tech categories – virtual reality, voice-controlled digital assistants, drones – push the entire industry forward. And the value of these innovations goes far beyond entertainment – today’s technology is changing our lives for the better.” 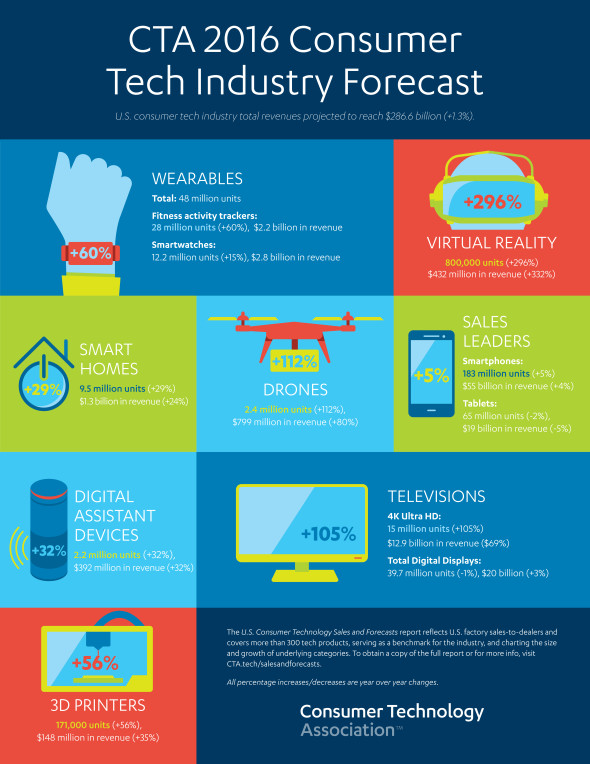 In addition to 4K UHD TV, CTA highlights the following among its expectations among emerging consumer tech product categories: