Home » Watch Communications, One of Largest CAF II Winners, Will Use Ericsson Fixed Wireless for the Project 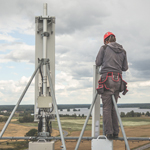 Watch Communications continued to make news with the announcement today that it will use fixed wireless equipment from Ericsson for the Connect America Fund deployment the company will make in rural Ohio, Illinois and Indiana. Watch Communications, a unit of Benton Ridge Telephone Company, was one of the biggest winners in the Connect America Fund CAF II auction, winning $53 million.

Watch Communications now is larger than Benton Ridge, a rural telco that can trace its roots back over 100 years, and Watch will be even larger when its CAF project is completed. A Watch Communications/ Benton Ridge executive told us last year that by land mass, the CAF II project represents an 84% expansion of the company’s coverage area.

The CAF II auction awarded funding for certain rural areas lacking high-speed broadband using a reverse auction, with funding going to the entity that committed to delivering service for the lowest level of support. A weighting system favored bids offering to deliver higher-speed service and Watch Communications’ bid called for speeds of 100 Mbps in some areas and 25 Mbps in others.

Watch Communications’ Ericsson Plans
The Ericsson equipment that Watch will use is intended for areas where Watch will be using licensed spectrum and CBRS spectrum. The CBRS band includes spectrum between 3550-3700 MHz, a portion of which will be auctioned and a portion of which is now available for unlicensed use on a shared basis with the U.S. military, which uses the spectrum on a limited basis along coastlines.

When completed, the Watch Communications CAF II project will make broadband available to nearly 24,000 additional locations, and as the Watch executive told us last year, the company also plans to expand to neighboring areas that aren’t part of the CAF II project.

More recently, Watch Communications has indicated even more ambitious plans. In July, Microsoft announced that Watch has been named a partner in the Microsoft Airband project, which aims to bring broadband to rural areas and which will rely, in large part, on fixed wireless technology. Plans for the Microsoft/ Watch partnership include bringing high-speed broadband to 50 counties in Indiana, 22 counties in Illinois and most counties in Ohio, eventually covering 3.78 million people, including 808,000 in unserved rural markets.

Today’s press release about Ericsson and Watch notes that Watch “will have access to” 4×4 and massive MIMO technology from Ericsson that, according to Ericsson, expand capacity and reliability in comparison with “competing LTE solutions.” Ericsson will also provide network management and the network can be “smoothly evolved” to 5G in “the near future.”

Watch, also known as W.A.T.C.H. TV, also has submitted a complete application to participate in an auction of millimeter wave spectrum scheduled for December.