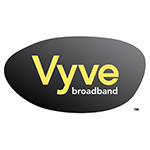 Their rural gigabit offer is initially launching in select Oklahoma markets. The service will rely on older DOCSIS 3.0 technology to deliver download speeds of up to 1 gigabit. According to a company spokesman, upload speeds are still being determined. Vyve will be using ARRIS equipment.

Vyve Rural Gigabit
It’s interesting that Vyve is opting to move forward with DOCSIS 3.0 for this rural gigabit deployment, rather than the emerging cable standard for gigabit broadband, DOCSIS 3.1. They’re not the only cable operator to rely on DOCSIS 3.0 for gigabit though.

Suddenlink, GCI, and Mediacom also are relying on 3.0. There almost appears to be a ‘DOCSIS divide’ for gigabit services. Larger cable MSOs like Comcast are getting aggressive with DOCSIS 3.1, while smaller tier 2 providers have pushed forward with DOCSIS 3.0 for gigabit.

It could just be timing considering DOCSIS 3.1 equipment is just coming to market. These smaller providers are obviously feeling pressure, marketplace or PR wise, to offer gigabit and have to go with what they can.

“While we recognize that 1 Gig is probably more speed than most customers need at this moment, but it’s clear that the online technology, information and entertainment landscape is evolving on an almost daily basis,” said Vyve CEO Jeffrey DeMond in a press release. “Vyve is committed to offering the most robust broadband service in our markets… Part of that commitment is looking not only at their current needs, but also what their needs will be several years down the road.”

Vyve won’t be alone with gigabit services in Oklahoma. Cox and Google have gigabit plans there, as do smaller tier 3 players like BTC Broadband.