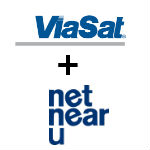 ViaSat already provides backhaul for some NetNearU installations, a ViaSat spokeswoman said. “NetNearU will use the best backhaul for the situation and ViaSat is a big part of that,” she said.

“There are quite a few locations where adequate terrestrial backhaul is not available or is insufficient,” the spokeswoman noted. “In addition, many large chains want a consistent Wi-Fi experience for their customers and ViaSat Wi-Fi and backhaul will help make that a reality.”

She added that “in many cases a brand with 1,000 stores may have a few hundred that can’t be serviced adequately by terrestrial backhaul.”

NetNearU will be a wholly-owned subsidiary of ViaSat and will retain its current location in Bryan/College Station, Tex.

ViaSat offers residential and business broadband services delivered via satellite. Since its latest satellite launch ViaSat has offered speeds of up to 12 Mbps for residential users and up to 15 Mbps for commercial users.

The company has plans to increase those speeds with its next-generation satellite targeted for a future launch. Satellite broadband providers like ViaSat are expected to see business increase as the Federal Communications Commission moves forward with its Connect America Fund plan to bring broadband to areas that cannot get it today.