Verizon said today that it has expanded its 5G Home Internet fixed wireless service to seven new markets – all of which are in areas outside its local service footprint. The service will use millimeter wave spectrum, enabling it to support speeds up to 1 Gpbs with typical download speeds of 300 Mbps.

Also today, Verizon said it has expanded its LTE Home Internet to more areas, doubling the areas where service is available. Although the company did not detail the markets getting the service, it noted that the areas include “urban, suburban and rural America.”

The company also noted that LTE Home Internet customers would be provided with routers that will work with Verizon’s 5G ultra-wideband (UW) network when the company begins deploying 5G UW service in their areas. Verizon uses the term “ultra-wideband” for 5G deployments in the millimeter wave band and the C-band, but according to the press release, the routers work specifically with C-band spectrum.

That’s the spectrum that recently had a record-breaking auction, and Verizon was the biggest winner in that auction. At least some of the spectrum that the company won is subject to the early clearing date at the end of this year.

According to highspeedinternet.com, all seven new Verizon 5G Home markets have at least two companies offering gigabit service – usually AT&T and a cable company, either Comcast or Charter/Spectrum — which raises the question of how Verizon expects to compete.

The company did not immediately reply to an email from Telecompetitor asking about that, but Verizon CEO Hans Vestberg offered some clues at an investor conference in May. At that time, Vestberg said that the company’s strategy of building a single network to support 5G fixed and mobile service would give the company the ability to better monetize its 5G investment.

That suggests that Verizon may not need to achieve huge 5G fixed wireless take rates; it’s just looking for incremental revenues on top of its mobile revenues.

The company is so confident in that strategy that it raised the target market it sees for fixed wireless service from 30 million to 50 million households. 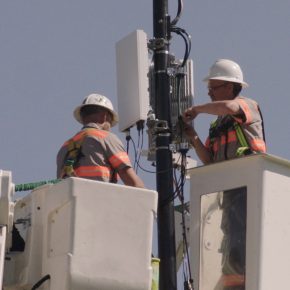