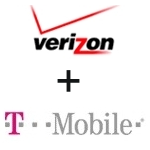 Verizon continues to try to drum up support for its plan to purchase spectrum from four of the nation’s largest cable companies, announcing a deal today to sell or trade some of that spectrum to T-Mobile if the cable spectrum purchase is approved. As part of the deal with T-Mobile, Verizon and T-Mobile also would exchange some of their current spectrum holdings.

According to an announcement from T-Mobile about the proposed deal, the deal involves a total of 218 markets and if approvals are received, T-Mobile would improve its spectrum position in 15 of the top 25 markets in the U.S.

“This agreement will provide T-Mobile with critical AWS spectrum, enhancing both network capacity and performance and allowing us to meet the growing consumer demand for 4G mobile broadband,” said T-Mobile CEO and President Philipp Humm in the announcement.

Humm said he expects the deal to receive FCC approval later this summer, which would enable T-Mobile to incorporate the new spectrum into its LTE rollout plans for next year and into its overall network modernization plans.

Does this mean T-Mobile is dropping its opposition to Verizon’s plan to purchase spectrum from the cable companies?

“Prior to these divestitures, we believed the transaction represented an unfair concentration of spectrum in the hands of the nation’s largest wireless carrier,” said a T-Mobile spokesperson in an email to Telecompetitor. “The significant spectrum divestitures by Verizon announced today are good for competition and consumers.”

In a separate announcement, Verizon Wireless President and CEO Dan Mead said Verizon would use the spectrum it acquires from T-Mobile to add capacity its LTE network. He also noted that today’s agreement “is further evidence of the importance of a secondary spectrum market to give companies the flexibility to exchange or acquire spectrum to meet customers’ growing demands for wireless data services.”