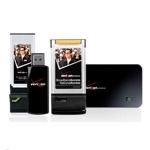 AT&T’s got the fattest margins and the largest number of activated devices, but Verizon and Sprint’s wireless networks each carried more mobile data traffic–more than 16 billion megabytes each–than AT&T. Verizon Wireless and Sprint customers accounted for 63% of the U.S. market’s mobile data network traffic last year, according to a report by ABI Research released yesterday.

“Interestingly AT&T had the most activated data devices in 2009. But it is laptop mobile data connections that have the most impact on operator data traffic levels. Mobile broadband laptop connections to Verizon and Sprint each far exceed AT&T’s laptop connections,” ABI practice director Dan Shey observed. “Verizon Wireless and Sprint can claim that data network coverage is as important as data network speed. But AT&T can claim that it makes the most money per MB!”

ABI’s expects Verizon to hold onto the top mobile data traffic position for the next five years. They forecast that AT&T will move up into the number two slot, with Sprint, T-Mobile and all other operators taking up third, fourth and fifth positions, respectively.

If mobile data traffic grows at anywhere near the rate ABI forecasts between 2010 and 2014–more than eight-fold–all market participants should be sitting pretty, however (at least from a mobile broadband traffic point of view).