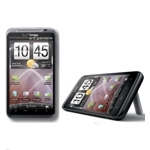 Verizon announced plans for the March 17th launch of their first 4G LTE powered smartphone, the HTC Thunderbolt. The new smartphone will be priced at $249.99 with a new two year contract.

Features of note for the phone include:

Customers are required to subscribe to a 4G data plan, which start at $30/month, with the smartphone. When combined with voice, the minimum monthly charges for Verizon’s 4G LTE plan is $70/month. The Mobile Hotspot feature adds another $20/month, with a 2GB data cap for the Wi-Fi sharing capability.

The launch pits Verizon squarely up with Sprint, the only other major nationwide carrier with a true 4G smartphone portfolio, which includes the HTC EVO (two models) and the Samsung Epic. Both T-Mobile and AT&T claim 4G smartphones as well, but they actually run on a HSPA+ network, which technically speaking is not 4G (although it’s debatable whether the 4G technology question really matters?).

It will be interesting to watch this play out in the marketplace since Sprint’s 4G smartphone pricing is about the same, although the actual device costs are lower (Sprint’s 4G smartphones range from $150 to $200). The competitive battle may come down to data pricing, where it’s widely perceived that Verizon will follow AT&T’s lead towards a capped wireless data service, rather than it’s current unlimited option.