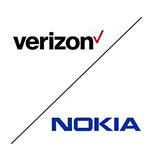 Marc Rouanne, president of Nokia Mobile Networks, focused on the outdoor element of the testing in a press release. “Nokia is committed to supporting Verizon’s advanced effort to bring 5G to commercial reality,” he said. “Our successful trial pushes the testing distance and because it has been conducted outside, tests the interference variables in an outdoor environment. This is a major milestone for preparing Verizon for widespread 5G implementation.”

Previous Nokia/Verizon 5G tests were done in the lab and were only brief data packet transmissions. The testing announced today is far closer to the way in which subscribers actually will use the 5G. Verizon says it will launch stationary 5G in Los Angeles, Sacramento and two other U.S. markets during the second half of the year. A mobile version will follow.

Nokia and Verizon are cooperating deeply on 5G. In February, the companies – along with Qualcomm – successfully tested a 3GPP-compliant NR 5G call. The call was made over licensed spectrum on a 5G NR prototype device from Qualcomm. The spectrum was provided by Verizon and the networking technology by Nokia. The test was conducted at a Nokia facility in Murry Hill, N.J.

The competition to announce firsts is intense. Nokia also is working with T-Mobile. Last week, the wireless carrier said that the companies completed a bi-directional over-the-air 5G data session on a 3GPP-compliant 5G NW system at T-Mobile’s Bellevue, WA lab.