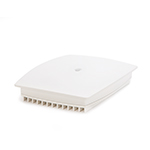 A Verizon LTE-U small cell trial looks to enhance indoor wireless coverage and add mobile services in high-density environments such as office buildings, shopping malls, hospitals and university campuses. LTE-U is a version of the LTE standard that operates in unlicensed frequency bands.

Verizon said today that it plans to conduct a trial of SpiderCloud’s LTE-U Enterprise Radio Access Network (E-RAN) in 3Q this year. The small cell digital wireless system provides 4G LTE capacity and carrier aggregation over both licensed and unlicensed spectrum. Other important features include self-organizing network (SON) capabilities, which enables the system to co-exist ad hoc with Wi-Fi hotspots, according to a press release.

Shammo added that Verizon considers LTE-U a more viable alternative than Wi-Fi when it comes to wireless voice services and offloading cellular network traffic from licensed spectrum. He noted that the hand-off between LTE and Wi-Fi leaves something to be desired.

Better known for its unconventional and aggressive promotional campaigns and service plans, T-Mobile is also turning to LTE-U and new antenna technology. CTO Neville Ray cited T-Mobile’s intention to champion the use of LTE-U, as well as plans to roll out 4×4 MIMO and three-band carrier aggregation, in a December 2015 blog post.