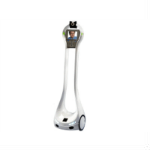 By being the first carrier to widely deploy LTE, Verizon Wireless may have set itself up to be the pioneer of new apps using the high-speed mobile technology, as several announcements this week illustrate.

Among the announcements was one involving a robotic telepresence app from VGo and another focusing on an m2m solution for monitoring indoor air quality from Manley Solutions. Several other announcements– including ones with TouchTunes Interactive Networks, Slacker Radio and Brass Monkey—were entertainment-oriented.

Developers of some of these apps apparently were involved in Verizon’s Innovation Program,which was created to advance the LTE ecosystem.

Robotic telepresence
Perhaps the most fascinating app that Verizon highlighted this week is one that is still in the demonstration phase. At the Consumer Electronics Show in Las Vegas this week, the carrier used VGo’s robotic telepresence offering to help staff its booth.

VGo’s product looks a lot like a Segway with a videoscreen and video camera where the handlebars would normally be. A remotely-located person — whose facial image appears in real-time on the video screen — can remotely control the device, enabling the person to move around in Verizon’s booth and talk to attendees. The device, which has also been tested in healthcare settings, can use WiFi or LTE connectivity.

“Using a wide-area, high-speed wireless network greatly expands the applications for VGo, and Verizon 4G LTE is the first service that meets the unique requirements of our real-time solution,” said Peter N. Vicars, VGo president and CEO, in the announcement of the CES demonstration.

Underlying the system is cloud-based software called Infratrac, which is available on Apple, Android and Windows devices. The system measures temperature, humidity, carbon monoxide and volatile organic compounds and has real-time alerts and notifications.

Entertainment apps
TouchTunes operates what it calls the “largest interactive out-of-home entertainment network in North America,” deployed in 50,000 bars and restaurants across the country. The company announced a new Virtuo Photo Booth that will enable users to take photos of themselves and immediately print them or upload them to Facebook or Twitter or send them via email. In addition, the company announced a Karaoke Mobile app that allows users to browse songbooks, choose a song and reserve a spot in the performance queue.

“We are now aggressively deploying a suite of breakthrough innovative products that will allow our consumers to fully leverage the power of Verizon’s 4G LTE network,” said TouchTunes Interactive Networks Chief Marketing Officer Christian McMahan in the TouchTunes announcement.

Slacker Radio offers what it calls a “customizable and personal online radio experience” in the U.S. and Canada that includes more than 150 “expert-programmed” music stations, personalized ABC News and ESPN sports content, and other content. The company now has an application that has been optimized for the Android tablet with a “content-rich interface” to get the most from an LTE connection.

“Our new application for the Android tablet combines the hands-off listening experience that Slacker is known for with hands-on, in-depth music discovery perfected for a high-speed network,” said Jonathan Sasse, senior vice president of marketing for Slacker.

Brass Monkey is an app that turns smartphones into game controllers for use with the company’s cloud-based game console. Although the company did not have any new product announcements, it did put out an announcement that its offering was being demonstrated in Verizon’s CES booth.