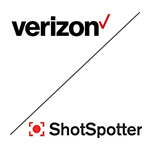 A new Verizon gunshot detection service relies on technology from ShotSpotter. Verizon will resell ShotSpotterFLEX, a gunshot detection product that identifies and helps locate gunshots to more quickly capture suspects and get help to endangered people, according to the vendor.

The goal of the product, which is used by more than 90 cities, is to deter gun violence. “We believe adding the leadership, reach and influence of Verizon as a ShotSpotter reseller will be a force multiplier for our business, allowing us to access and serve more cities across the country,” ShotSpotter President and CEO Ralph Clark said in a press release. “Verizon’s large and experienced sales teams have longstanding relationships with many municipalities, so it’s a natural fit.”

Verizon Gunshot Detection
ShotSpotter will be offered as a standalone product in Verizon’s Smart Communities suite, which includes public safety and traffic management. Earlier this year, the companies agreed that ShotSpotter would be included in Verizon’s Light Sensory Network, which is an IoT platform deployed on street lights.

ShotSpotter Flex is a software-as-a-service (SaaS) offering that sends alerts within a minute of gunshot detection to dispatch centers and patrol officers, according to the company.

Lighting infrastructure often is the key target of IoT deployments. Co-locating ShotSpotter with lighting allows power sharing and almost instant comprehensive coverage. In addition, lighting is one of the low-hanging fruits that can subsidize more speculative IoT initiatives. Simply turning off streetlights at dawn – instead of a preset time that may be well after sun up – can save municipalities a good deal of money. Deployment also can be done in conjunction with the transition to LED lighting, thus spreading the cost across two promising technologies.