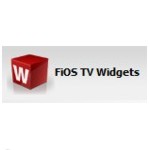 The FiOS Widget Bazaar is Verizon’s take on an app store for FiOS TV. FiOS subscribers can search for and activate applications, or widgets as Verizon calls them. For now, there are fairly limited widgets to choose from.

There are a couple social media apps that allow subscribers to interact with Facebook, Twitter, and Yelp among others. There’s the customary news, weather, and sports widgets. But we’re far from any resemblance to app stores featured on wireless platforms.

Eventually, Verizon hopes that will change. They recently launched FiOS Labs and an updated FiOS SDK in the hopes of encouraging additional app development. In the interim, they just gave the widget bazaar a facelift.

“Starting today, FiOS TV widgets have a new look and feel, and the Widget Bazaar is even easier to navigate.  If you’re tired of scrolling the listing of widgets, look no further.  Now, customers will see a list of categories on the left hand side of the widget home screen – News, Entertainment, Shopping and Social Networks, to name a few, for a total of nine categories.  FiOS TV customers in the New York metro area will see the new look today, and it will launch in other regions over the next several days,” says Heather Wilner in a Verizon At Home blog post.

The FiOS Widget Bazar will be something to watch. While still a young trend, apps are quickly evolving into an important competitive differentiator for not only wireless, but TV and broadband alike.

One thought on “Verizon Gives FiOS Widgets a Facelift”