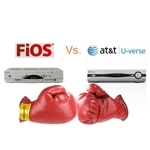 If you dig into Verizon and AT&T 2Q09 numbers, you find some interesting things. When comparing the two, one possible assertion is that FiOS does appear to be outperforming U-Verse. I freely admit, it’s not exactly an apples to apples comparison. But since FiOS and U-Verse are their respective company’s premium brand delivering a ‘compelling triple play bundle,’ I think it’s fair to do some comparisons.

If providing details and metrics about progress equates to performance, FiOS beats U-Verse – easily. AT&T is quite coy about the performance of U-Verse in their quarterly reports. They don’t offer straight penetration data, often mixing U-Verse metrics with other products, leaving a lot to be desired. While Verizon could offer more details, they definitely offer much more insight on FiOS. Does AT&T have something to hide?

Why is FiOS outperforming U-Verse? Consider these observations:

It’s important to recognize this analysis focuses on operational metrics, not financial. There are those that will argue, in addition to these observations, the ROI for U-Verse and FiOS have to be considered. That’s the subject for another day.  FiOS does appear to be outperforming U-Verse, at least for the time being. Verizon’s decision to overbuild AT&T in some Texas markets makes a little more sense.