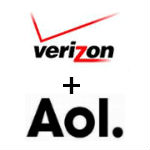 Verizon will buy AOL for $4.4 billion or $50 per share. AOL primarily focuses on digital content and online advertising, but has a long storied past with the Internet. Its early foundation was built on dial-up Internet subscriptions, a legacy that still contributes today, with over 2 million existing dial-up subscribers.

“At Verizon, we’ve been strategically investing in emerging technology, including Verizon Digital Media Services and OTT, that taps into the market shift to digital content and advertising,” said Lowell McAdam, Verizon chairman and CEO.  “AOL’s advertising model aligns with this approach, and the advertising platform provides a key tool for us to develop future revenue streams.”

Verizon says AOL will maintain its brand and operate as a wholly owned subsidiary of the company. Current AOL CEO Tim Armstrong will continue to lead AOL operations after closing.

“Today, we are announcing that the largest and most innovative wireless and cable company – and the one investing the most in high quality mobile content – is acquiring AOL with the strategy of building the biggest media platform in the world,” said Armstrong in an internal memo to AOL staff. “Just as AOL has propelled The Huffington Post, Adap.tv, TechCrunch, and other companies we have acquired, Verizon will propel AOL and comes to the table with over 100 million mobile consumers, content deals with the likes of the NFL, and a meaningful strategy in mobile video.”

Verizon Digital Strategy
Verizon has made no secret of its push into OTT video, featuring a mobile first approach. They have acquired other companies or assets along the way to build the capability and reach that helps them capitalize on the ongoing shift to digital media distribution. With this AOL acquisition, they are poised to gain inroads into the fast growing digital, mobile, and programmatic advertising arenas.

They appear to be building a notable digital media focus that will take advantage of their significant mobile assets, positioning Verizon to be a player in broadband access, digital media, and advertising. They have this massive mobile distribution network, built on 4G LTE. Now they’re looking to leverage that network for more than just access revenue. Much more.

AOL also still has 2 million dial-up subscribers, many of which Verizon can target for broadband and mobile broadband conversion as well.

It’s also interesting to compare and contrast Verizon moves against AT&T. Verizon seems to be more focused on emerging digital media platforms, where business models are young and still being defined. AT&T it seems has decided to go for the tried and proven – through its DirecTV acquisition – and milk it for as long as possible, while also attempting to integrate those legacy models and technology into emerging digital and mobile platforms.