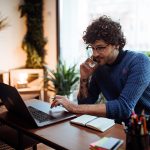 Indirect evidence from Verizon suggests that most people staying at home due to the COVID-19 pandemic are in the northeast and central Atlantic states. Verizon, like most carriers, is tracking and reporting COVID-19 network traffic trends.

In its latest update, the carrier found that compared to a typical pre-COVID 19 day, mobile handoffs – say from tower to tower, as people are on the move — are down 53% in the New York City metropolitan area and 49% in upstate New York. The Mid-Atlantic/greater Washington DC area is down 39% and New England is down 37%. Southern California is down 35% and northern California is down 27%. Handoffs are down 29% nationally.

Verizon also sees increases in the tools that are used to work and learn at home. “This week we have seen traffic from collaboration tools increase nearly 10 times over a typical day,” Verizon CTO Kyle Malady said in a press release about COVID-19 network traffic trends. “Being able to see and speak with colleagues, friends and family has become increasingly important to people even as they physically distance themselves at greater rates.”

It was assumed since the moment the likely scope of the disruption became clear that telecommunications networks would be challenged and deeply impacted. In addition to supporting business users working from home and increased entertainment demands, carriers are working to keep pace with an explosion in remote learning and telehealth.

During the third week of March, network usage monitoring firm OpenVault observed COVID-19 network traffic trends, highlighting broadband consumption spiked by 41% in the week after the Center for Disease Control declared the pandemic and that the usage was on track to beat the previous monthly record.

Later in March, Akamai detailed adjustments that it was making to its content delivery network to avoid congestion as usage grows and patterns change. Wireless carriers, hoping to provide services as seamlessly as possible, temporarily set aside competition and loaned each spectrum where it made sense.

The FCC, of course, is a main player the ongoing and constantly changing situation. It established the Keep America Connected initiative soon after the crisis occurred.