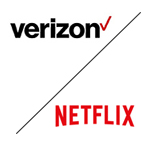 Both new and returning customers who purchase Verizon Fios Gigabit connection Internet or Fios Gigabit Connection Triple Play under a two-year agreement will get a free year of Netflix streaming video, the company said. The value of the Verizon Netflix offer is $190. Customers who already subscribe to one of the qualified offerings can get the Netflix offer by renewing their service.

For qualifying customers who already subscribe to Netflix, Verizon will pick up the cost of the streaming service for a year.

This is not the first time Verizon has used the strategy of partnering with a content provider. Last November, Verizon offered a free year of Amazon Prime. The offer also extends to new and existing Amazon Prime customers. At the time, Verizon said that the Amazon Prime deal was worth about $119. The promotion took the enticement a bit further by adding a free Amazon Echo for customers taking the triple play under a two-year deal.

Since last summer, Verizon Unlimited subscribers have been offered six months of Apple Music in their plans. Starting last month, Apple Music also was included in the Beyond Unlimited and Above Unlimited plans. The offer enables subscribers to stream over 4G or WiFi networks or download for later playback.

The Verizon Netflix deal and the others are important to Verizon’s strategic approach, which was made clear last May when Chairman and CEO Lowell McAdam said that the carrier did not intend to develop its own OTT video service. He said the company would partner with existing players and bundle with 5G. The carrier’s Oath assets — which include digital content from Yahoo, AOL and others – are seen as a complement to the partner OTT offerings.