Home » Verizon and Skype Get it On 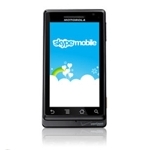 Will this day be a footnote in the history of telecom, or just another day? I ask because Verizon and Skype have announced a deal that blesses the use of Skype mobile on Verizon wireless smartphones. I would argue that such a union would have been unthinkable two or three years ago, but ‘the times, they are a changing.’

The Verizon blessed Skype mobile app will only be available on certain 3G enabled handsets, at least initially. Those handsets include the Motorola Droid and several BlackBerry models, among others. Under the agreement, Verizon Wireless 3G smartphone users with data plans can use Skype mobile to:

The key of course (at least for Verizon) is that their customers have to buy a data plan (it’s not clear as of yet, which data plan). The move is illustrative of the ongoing transition from dependency on voice minute of use generated revenue to data revenue becoming what ‘butters wireless carrier’s bread.’ Of course, that same transition is happening on the wireline side.

The development also allow Verizon to rub this in the nose of AT&T’s iPhone, which has had high profile disputes with VoIP applications, including Google Voice.

2 thoughts on “Verizon and Skype Get it On”