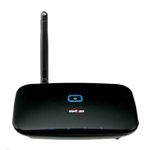 Think of it as a wireline voice femtocell, which uses the traditional wireless network, rather than broadband for access. Verizon Wireless intends to charge $20/month for unlimited calling. Customers can also opt for a $10/month plan, which acts as an additional wireless line on their wireless account. Calls on the $10/month plan count against the subscriber’s wireless minute plan, while they do not count against any plan with the $20/month option. The actual device retails for $129, but is free with a new two year subscription. There is also a $35/month activation fee, which Verizon is currently waiving.

It’s an interesting move by Verizon Wireless. One that they hope allows them to continue to squeeze out margin from their wireless facilities. As Verizon and other wireless providers shift to 4G networks, which are data centric for both voice and broadband, their legacy 2G and 3G networks are still available for voice capacity. By marketing a voice only wireline replacement service, they are in effect leveraging that legacy voice capacity for additional margin. A handsome margin I would assume. As a result, I suspect we’ll see more infringement on the declining wireline voice business from hungry wireless providers looking to leverage their legacy wireless voice networks.