The 25/3 Mbps speed level is particularly important because it is the new target that the FCC has proposed for the high-cost Universal Service Fund.

USTelecom worked with consultancy Telecodata to produce the broadband research, which was based on information reported by service providers and collected through FCC Form 477.

Approximately 79% of housing units are non-rural and 21% are rural, according to U.S. Census figures cited by USTelecom. 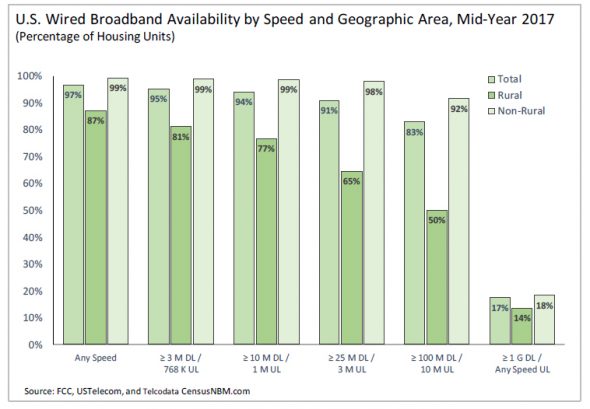 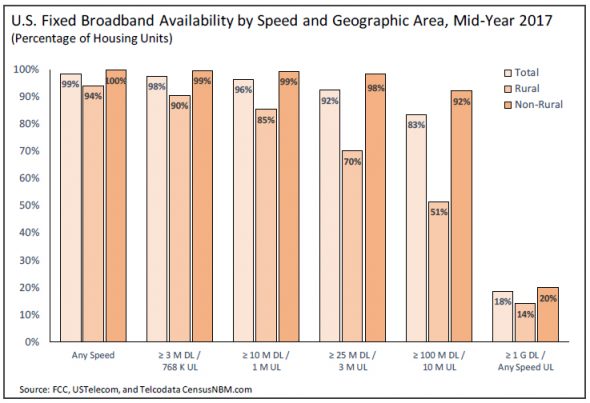 “USTelecom believes that every American should have the opportunity to connect to the internet through sufficiently robust broadband service,” wrote USTelecom in the new report, titled U.S. Broadband Availability Mid-Year 2017. “For some areas, this requires government support. The FCC’s Connect America Fund provides a good starting point. Further progress will require additional funding. Policies must be targeted, flexible and efficient. Policies should target support to specific areas where the economics do not support deployment or upgrades. In addition, governments must not fund wasteful, duplicative overbuilding of existing facilities. Policies must also be sufficiently flexible to allow for the most cost-effective solutions rather than adhering to rigid technology or speed requirements. Finally, it is essential that funding be dedicated and direct, using a mechanism like the Connect America Fund for the most economically and administratively efficient distribution of funds.”