Home » USF Contribution Factor Hits 24.4%, With Grandma Paying for the Broadband She May Not Even Use 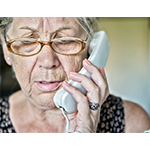 The contribution factor has been climbing steadily for years as voice revenues decline, requiring service providers to collect a higher and higher percentage of voice revenues to maintain support for USF.

At one time the funds were used primarily to cover some of the costs of providing voice service to rural areas, to low-income users and to schools and libraries. Over the last two decades or so, policy has changed to allow the money to be used to cover broadband as well as voice services, but how the funding is collected to support those services has not changed.

Ironically, the people most likely to make long-distance phone calls, such as older Americans, are also among those less likely to subscribe to or use the broadband services that their payments are helping to support.

The Universal Service Contribution Factor
While it might seem logical to collect USF funding as a percentage of voice and broadband revenues, those who oppose that idea are well organized and policymakers have been unwilling to challenge them. Opponents position expanding the contribution base to include broadband as “taxing the internet.” FCC Commissioner Michael O’Rielly, who opposes the idea, went so far as to call it a “sin tax,” conveniently overlooking the logical extension of the argument – that voice service is already subject to a sin tax, making grandma and other voice service users perhaps the unlikeliest of sinners.

The budgets for all four portions of the USF fund have been capped, subject to an inflation factor (although some of the caps are firmer than others).  Nevertheless, the contribution factor continues to rise because overall long-distance voice revenues have been declining.

At one time it looked like the FCC might try to phase out the high-cost portion of the USF fund, which comprises somewhat more than half of the overall budget. But that seems unlikely to happen any time soon. Recognizing that a substantial portion of the U.S. still lacks broadband and that broadband demand continues to climb, FCC Chairman Ajit Pai recently proposed replacing a portion of the high-cost program that was due to expire in 2021 with a new Rural Digital Opportunity Fund that would last until at least 2031.

One thing I give O’Rielly credit for is that he is thinking about how to pay for all this moving forward – something the other commissioners have been silent about. His proposed solution is to cap the overall USF fund and if necessary, to shift funding from one part of the USF program to another — although he has stopped short of saying which part of the fund would get more and which would get less.

Opposition to that idea is already arising from those who benefit from portions of the fund that would appear most likely to see funding reduced, such as the schools and libraries program, the rural healthcare program and the low-income program. And O’Rielly’s solution still leaves grandma and other voice service users footing the bill for whatever programs the commission decides to fund.

It was less than a year ago that the USF contribution factor first exceeded 20%.  In just 10 months, it has climbed an additional four percentage points or 20%.

Do we really think we can keep this up for another 10 years or more?