Home » “Unlimited” or Shared Data Plans Mostly are Marketing Platforms, at the Moment

The overwhelming majority of customers on AT&T, Sprint, T-Mobile and Verizon networks studied by NPD Connected Intelligence don’t even use 2 GBytes worth of mobile data per month, which suggests most consumers do not need “unlimited” service plans.

For that matter, the new Verizon Wireless “Share Everything” plans seem unlikely to have serious end user repercussions, for the moment. The actual monthly differences in fees are rather slight, in many cases, compared to a traditional plan. The big changes will come in the future, as data consumption, on multiple devices, becomes a bigger issue for service providers and end users alike.

For the moment, though, both plans use “unlimited” features in ways that do not threaten service provider networks because most people actually use very little of the unlimited applications.

And even when customers had unlimited data plans, most didn’t take advantage of it, the study suggests. “In general, Sprint’s usage is the same as the other networks and less than T-Mobile USA,” Hold said.

Wi-Fi might now be a major part of the usage pattern, as it is possible users now know how to use offloading techniques to protect their mobile data usage buckets.

On average, smart phones are making eight Wi-Fi connections per day and offloading as much as 35 percent of total data consumption to a Wi-Fi network, while heavy users offload as much as 70 percent , according to Devicescape. 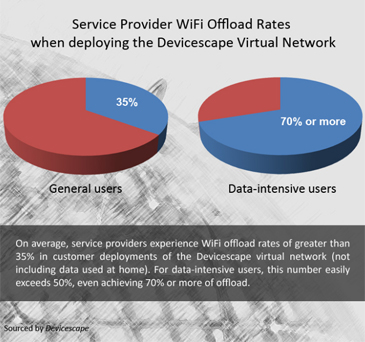