U.S. enterprises and consumers are expected to spend more than $47 billion over the next five years on Ethernet services provided by carriers, according to a new market research study from The Insight Research Corporation.

With metro-area and wide-area Ethernet services readily available from virtually all major data service providers, industry revenue is expected to grow from nearly $5 billion in 2012 to reach just over $11 billion by 2017.

However, year over year spending growth is expected to gradually stall and by 2017 the annual revenue growth rate will be half of what it is today, Insight Research says.

According to the study, Ethernet’s central driver continues to be its ability to meet seemingly endlessly growing bandwidth demands at lower cost and with greater flexibility than competing services.

A major growth driver in years past had been the large-scale migration of wireless backhaul cell sites from TDM to Ethernet, and though still a contributory growth factor, backhaul growth will start to moderate as LTE deployments are completed.

“Wireless backhaul had been a major factor in this fast-growing telecommunications services sector, but with much of the conversion of TDM to Ethernet completed, we are forecasting that spending on Ethernet will moderate,” says Robert Rosenberg, president of Insight Research. “Over the five year forecast period we project a compounded annual revenue growth rate of 17 percent, with growth slowing by 2016 to be more in the range of 12 to 15 percent.” 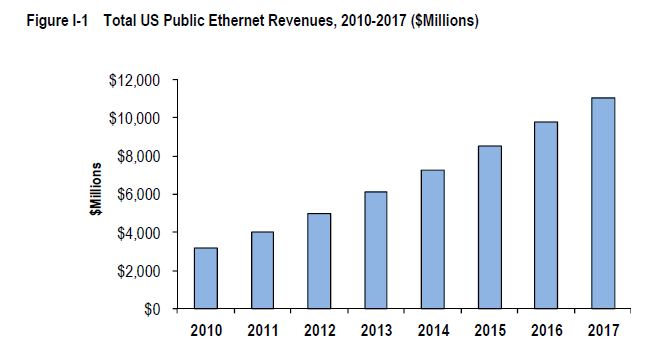