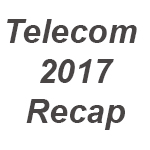 It was virtually impossible to miss some of the top telecom stories of 2017 –such as the recent Net Neutrality reversal or carriers’ ongoing 5G and fixed wireless activities. Some other important stories initially got a bit of attention but then faded from the collective consciousness.

I thought I’d finish off 2017 with observations about both types of stories – including links to our coverage of these topics from this past year.

Top Telecom Stories of 2017 (High-Profile)
1 Net Neutrality. Perhaps the highest-profile telecom story of 2017 was the FCC’s decision to reverse the Net Neutrality guidelines imposed under the previous administration. This happened just a week ago at an FCC meeting that featured a room evacuation on the advice of security personnel.

We’ve seen several flip-flops on Net Neutrality from one administration to the next, which is why some stakeholders say the topic would be best addressed with a legislative solution. It took Senator Marsha Blackburn less than a week to introduce such legislation.

2 5G Wireless. 5G will be the next technology battleground in the highly competitive U.S. wireless market. Verizon’s market positioning traditionally has emphasized the quality of its network and the company has set a goal of being the first to deploy the service.

It’s important to note, though, that 5G means different things to different people. Initial trial deployments have been in a fixed configuration because fixed service was the first to be a viable possibility. Verizon pioneered 5G fixed wireless and apparently wants to be first with mobile 5G as well, which raises another semantic issue.

T-Mobile argues that 5G can be deployed in any spectrum band and has set its sights on a prompt 5G deployment in the 600 MHz band – a deployment that could yield some benefits such as lower latency but which would not support the maximum speeds that some people associate with 5G. A Verizon technology executive argued recently, however, that his company plans to deploy 5G at high-frequency bands in order to support maximum speeds – an ambitious goal, considering that high-frequency bands will require a lot more cellsites.

3 Fixed Wireless. Both AT&T and Verizon seem to see fixed wireless as a big opportunity and are likely to rely heavily, but perhaps not exclusively, on 5G to support those offerings. AT&T sees fixed 5G as one of several methods of providing gigabit broadband. Verizon, meanwhile, has indicated plans to deploy fixed 5G to as many as 30 million homes, including some outside its home market.

4 CBRS Band Battle. What the FCC decides to do about the hotly contested 3.5 GHz CBRS band will impact both 5G and fixed wireless. Major wireless carriers want the spectrum for 5G, arguing that it will be an international standard – even though current rules call for the spectrum to be made available to small license areas, which would favor its use for fixed wireless.

5 Telco Broadband Economics. Integrated carriers – those with wireless and wireline businesses (AT&T and Verizon) – are deploying more and more small cells, including to support 5G. Small cells require deploying fiber deeper into the neighborhood, and that has improved the business case for residential broadband. Also impacting broadband economics are technology advances such as Gfast and the cash infusion some carriers are getting from the Connect America Fund. AT&T had been facing a declining broadband business because in years past it relied heavily on DSL. But the company now sees a return to growth in its broadband business because it has many more high-speed lines.

6 Mobile Video. Video now comprises the majority of traffic on mobile networks and carriers are seeking revenue opportunities beyond monthly service contracts. The desire to better monetize mobile video and other mobile content drove Verizon’s Yahoo and AOL purchases and is a key driver behind AT&T’s plans to purchase Time Warner. It also was an important factor in T-Mobile’s purchase of Layer3.

7 The Internet of Things. Carriers made considerable progress in advancing their Internet of Things ambitions in 2017 – including turning up LTE-M networks, making agreements with automakers involving the connected car and even developing a high-tech alternative to ring-bell-for-service.

Top Telecom Stories of 2017 (Low-Profile)
Sometimes big news gets lost in the chatter – perhaps because its impact isn’t felt right away. Here are my top three examples of important but low-profile developments from 2017.

1 A New Video Delivery Method. AT&T said something very important back in September, but there was a lot of misreporting about it. The company said it planned to “take DirecTV Now and leverage it into a scalable platform that goes into the home as a primary service.” In other words, the company plans to move to an over-the-top delivery method for traditional subscription TV, eliminating the need for a set-top box, QAM or other traditional video technology. This approach will even eliminate the satellite dish, although that won’t happen overnight.
AT&T also said it would be “ambivalent as to whose broadband the television service traverses” and that the only thing that would be needed in the home to support the offering would be a “very thin client.” The company said it would be able to make the offering because its DirecTV purchase gave the company the ability to negotiate the necessary contracts with content owners. But now that AT&T has paved the way, perhaps some other companies will follow. Indeed, the offering that T-Mobile is working on as a result of its Layer3 purchase just might be something along the same lines.

2 Cable Looks Beyond DOCSIS 3.1. The DOCSIS 3.1 standard was pegged as a telco-killer because it lets cablecos support gigabit speeds and is a simpler upgrade than what telcos must undertake to get equivalent performance. The hitch is that DOCSIS 3.1 can support gigabit speeds only for a limited number of people — and cable companies seem to be increasingly concerned about that, especially where they face competition from telcos that have deployed fiber-to-the-home.

One manufacturer told Telecompetitor a few months ago that cable companies were getting serious about moving to a more distributed network architecture with the goal of supporting higher speeds to more people. At least one cableco already has made this move, and it’s a development that’s likely to see a higher profile next year.

3 Microsoft Tech Spark. Did you forget about Microsoft’s rural broadband initiative, announced in October? I almost did until I spent a few hours this week looking back at Telecompetitor’s 2017 coverage. The centerpiece of this initiative is fixed wireless broadband operating in TV white spaces spectrum, but digital literacy, digital transformation for rural businesses and some other elements are also part of Microsoft’s plans. Microsoft said it will work with various types of service providers, as yet unannounced, on deploying the fixed wireless technology, dubbed Airband. This, too, is something we anticipate hearing more about in 2018.

I hope readers have a great holiday and winter break. Telecompetitor looks forward to covering these stories and more for you in the coming year.