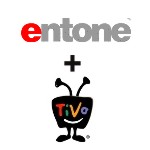 TiVo has had some success in courting traditional cable TV operators to bring the TiVo experience to cable TV subscribers. Their current and past cable partners include Mediacom, Midcontinent, RCN, CableONE, and Charter, among others. But to date, TiVo has done little in the IPTV arena. That may change if Entone has anything to say about it. Both companies announced a partnership that brings the TiVo experience to pure play IPTV operators around the globe.

“Entone is the first IPTV device partner that TiVo is working with,” Steve McKay, CEO of Entone told me today in a phone interview. “The initial launch is a cloud DVR application for IPTV operators.” TiVo is in a limited IPTV trial with Swedish operator Com Hem as well.

TiVo provides a hosted DVR application that IPTV service providers can tap. This cloud application may initially be more appealing outside of the U.S., given the content rights challenges for cloud/networked DVR here in the U.S. Perhaps those challenges are diminishing – time will tell. TiVo and Entone will unveil the new approach at the upcoming IBC Conference in Amsterdam. Product availability is expected for later this year.

“At Entone, we’ve really committed ourselves recently that we’re working in a world of multiple connected devices,” says McKay. “This initial focus is on the small footprint Kamai device, but I expect other devices, like iPads and other connected devices to be supported in the future.” McKay points to Entone’s recent partnership with LG as further evidence of their connected device focus and freely admits that Entone sees a set-top-boxless future, but that won’t prevent this set-top-box manufacturer from participating in it.

I asked McKay if he sees this application as having potential for the emerging broadband TV model, where broadband carriers are adding TV services to their broadband pipes, sans a traditional IPTV deployment. While the initial focus for this partnership is traditional IPTV operators, McKay sees future opportunities for this emerging model. “That could be very interesting. Adding live TV, TiVo and OTT to broadband.” he says.