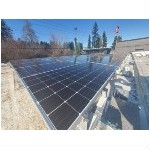 Clear Creek is a cooperative that can trace its roots back over 100 years to when it started out as a small telephone company. The funding that the company received for the solar project is expected to cover about 85% of the project cost.

Telecom Solar
The telecom solar project kicked off in late January and is expected to be fully functional by mid-spring, when it will generate nearly 110 kilowatts of solar energy.

Since 1999, more than 200,000 PGE customers have supported clean energy by choosing one of PGE’s Green Future options. Funds generated through this program have helped fund more than 8 Megawatts of new renewable energy generation currently installed in Oregon, with another 3 Megawatts under construction.

“We are thrilled to be a part of this power source evolution toward greener and renewable sources,” remarked Clear Creek Communications CEO Jay Henke, in a prepared statement. “This is a long-term plan and the solar project is just the start to make that bigger plan a reality. Stay tuned for more exciting information on this project and presentations of its benefits to not only Clear Creek but the future potential for the Redland Community.”

Clear Creek keeps a keen eye on energy use from its products and services as well. The company said it has been systematically migrating away from power hungry set top television boxes and WiFi routers to more eco-friendly, further reaching options that benefit both our members and the environment.