States must act – and act promptly—to determine how they will address an impending shortfall in funding for rural broadband and telecom services, according to a new report issued today by telecom advisory firm Balhoff & Williams, LLC.

“Our analysis suggests that service will falter in certain regions or significant incremental costs will have to be borne by customers, unless new sustainable and predictable support revenues are made available,” the authors write in the report.

The problem, according to the authors, is that existing federal support mechanisms such as inter-carrier compensation and the traditional voice-focused Universal Service program are being phased out — and the replacement broadband-focused Connect America Fund program is underfunded. The authors argue that many rural areas will not receive support through the new programs – either because they do not qualify for funding or because carriers will reject funding at the levels and terms and conditions offered by the government. And with current programs being eliminated, the authors see a distinct possibility that carriers may no longer be able to afford to deliver telecom service in certain areas unless the states step in.

The 45-page report contains a wealth of data about the rural telecom industry and the impact of ongoing reforms to the Universal Service program and inter-carrier compensation system. Traditionally those systems have helped cover the cost of communications services in rural areas that are more costly to serve on a per-customer basis.

Some of the more interesting data points from the Balhoff and Williams analysis: 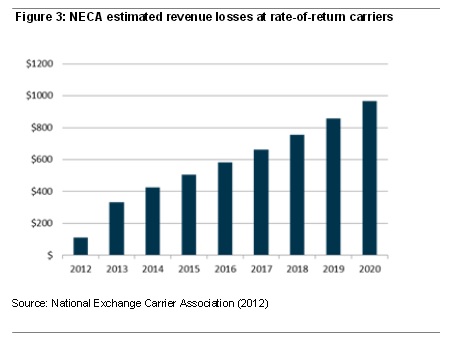