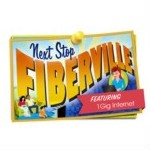 With over 1.2 million connections of broadband, phone, and IPTV services in 150 communities across the U.S, TDS is the seventh largest traditional telco in the country. Like many of their telco brethren, TDS has embarked on a FTTH overbuild, including a gigabit offer, which will eventually reach 25% of their footprint. In an attempt to achieve optimal penetration rates for FTTH, TDS launched their Fiberville campaign, a pre-sale approach that appears to be paying dividends.

TDS just announced additional FTTH and gigabit expansion, including markets in Indiana, New Hampshire, and Wisconsin. Their Fiberville approach, which offers pre-sale incentives for FTTH and gigabit services, will be offered in these markets.

TDS Fiberville Response is Strong
“The overall response to Fiberville has been strong and, in most places, has met or exceeded objectives,” said Shane West, vice president of consumer marketing and product development for TDS Telecom in an email interview with Telecompetitor. “This pre-sale approach has been a valuable way to accelerate customer take rates and adoption.”

The goal with Fiberville is to achieve a 15% pre-sale goal before FTTH services are offered in any given neighborhood. But TDS does not require a firm commitment with the pre-sale promotion. Customers are not contractually obligated to buy the service. In fact TDS will build FTTH to that market whether the 15% benchmark is reached or not.

“The Fiberville marketing campaigns are mostly about achieving optimal penetration rates earlier in the market,” said West. “To drive those results, we offer incentives to customers to sign up early (free HD channels for life or a free broadband speed upgrade for life).”

If the neighborhood does not reach the full 15%, TDS will still build FTTH, but the pre-sale customers who signed up though Fiberville will not receive the incentive. It offers a motivational tool for neighbors to encourage each other to pre-sign through Fiberville.

TDS would not reveal how many customers have signed up for Fiberville. But the closing ratio for those who pre-sign and then actually buy FTTH service ranges from 50% to 75%, with competition playing a major role in that closing variability. West says competitors can get quite active once Fiberville is enacted in any given neighborhood.

“For example, we had a market in which we initiated the Fiberville campaign, and the competitor immediately rolled out an aggressive offer with a 2-year service agreement,” said West. “By using direct sales teams to go door-to-door, the competitor was able to make it harder to achieve our goals.”

With a closing ratio of 50% to 75%, TDS can get a good sense of initial market demand for FTTH services in neighborhoods and overall markets, and plan accordingly. “Customers have generally been very interested in adopting the new products that a fiber network can bring,” said West.

It’s a practice that has “changed the game” according to AT&T CEO Randall Stephenson. Many carriers have now adopted it, particularly for gigabit launches.

For TDS, their FTTH plans march on. They wouldn’t reveal any subscriber numbers, a trend that is very much in style these days. But they continue to build out FTTH markets, and offer gigabit, IPTV and other services in those markets.

“We’ll continue to make fiber investments to achieve our goal of approximately 25 percent of our ILEC,” said West.