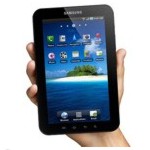 The popularity of the tablet computer is impacting many facets of the broadband industry. Apple has virtually defined a new market segment with the iPad, and now competitors are scrambling to catch up. Consumers are buying tablets in record numbers. So much so that netbook and laptop sales are taking a big hit, as consumers migrate to tablets for their portable computer needs. Best Buy CEO Brian Dunn tells the Wall Street Journal that their internal analysis shows that “… the iPad had cannibalized sales from laptop PCs, especially netbooks, by as much as 50%.”

The tablet segment has pretty much been dominated by Apple. Samsung hopes to change that. They’ve enlisted the help of wireless carriers, including Verizon, AT&T, T-Mobile, and Sprint, to help launch their new Android powered Galaxy Tab. Starting this Fall, these carriers will offer the tablet in a similar fashion to the way they distribute cell phones, selling them along 3G and 4G mobile broadband subscriptions.

In many ways, tablet computers are larger versions of smartphones, without the phone part. Some features of the Galaxy Tab include:

The tablet is yet another broadband enabled gadget that has caught fire with consumers. Broadband carriers of all sizes should look for ways to leverage this trend and help their customers take full advantage of all of its capabilities.