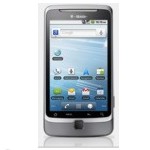 T-Mobile unveiled its first true HSPA+ smartphone, the G2, an update to the first Google Android smartphone on the market, the G1. The HTC manufactured G2 is the latest smartphone entrant into a very crowded smartphone market, which T-Mobile hopes its HSPA+ pedigree will provide some type of competitive advantage. T-Mobile is making the phone exclusively available to its customers later this month and to the general public shortly after that.

T-Mobile is marketing the G2 as having 4G speed, even though, technically speaking, HSPA+ is a 3G technology. They’ve taken some heat for that tactic, but they’re plowing ahead nonetheless. “Now, with the launch of the T-Mobile G2, we are re-teaming with our partners at Google and HTC to provide T-Mobile customers with another first — the first Android smartphone designed to deliver 4G speeds on our new network,” said Cole Brodman, chief technology and innovation officer, T-Mobile USA.

The G2 is tightly integrated with Google services including Google Voice, Google Voice Actions, Google Goggles, Gmail, Google Maps, YouTube, Google Talk, and Google Earth, among others. Safe to say T-Mobile is embracing Google and its Android platform. Other features of the G2 include:

Despite the controversy of 3G vs 4G, the G2 can give all current smartphones, including the limited true 4G capable ones from Sprint, a run for the money. T-Mobile’s HSPA+ network offers peak theoretical speeds of 14 Mb/s, but 5 – 7 Mb/s will be the more actual speed experience – an experience that few smartphones can rival.