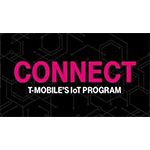 T-Mobile has launched its Narrowband Internet of Things (NB-IoT) service nationwide, which the company claims is a first in the U.S.  The T-Mobile NB-IoT offering is also the first to operate in the guard bands, according to the company.

T-Mobile likened guard band operation to driving down the shoulders of the highway. That approach, the company said, uses “precious spectrum resources most efficiently” and eliminates the need for IoT traffic to compete with other data traffic for network resources.

The T-Mobile NB-IoT service costs six dollars a year for up to 12 megabytes per connected device. Users can send up to 10 single-packet transactions per hour at up to 64 kbps. The modules required for communications sell for as little as five dollars, according to T-Mobile’s IoT web page.

T-Mobile NB-IoT
NB-IoT is one of several different communications protocols used for the Internet of Things. Other U.S. carriers including AT&T and Verizon already have launched nationwide service using other IoT protocols such as LTE-M.

Carriers are finding that they need to support a range of IoT protocols to meet the diverse needs of IoT customers.

AT&T said last month that it will launch a nationwide NB-IoT network next year that will co-exist with the company’s LTE-M network. At that time, AT&T highlighted the differences between the two technologies. The company said NB-IoT is well suited for basic data requirements, while LTE-M supports “more robust” capabilities such as bandwidth for firmware and software updates, mobility and voice over LTE.

IoT communications technologies typically are lumped together into a broad category known as low-power wide area (LPWA) or LPWA network (LP-WAN).  All these technologies are designed to provide longer battery life and lower cost in comparison with traditional mobile service – goals that generally are achieved by reducing the amount of data that can be transmitted in comparison with traditional service.

At least one research firm sees NB-IoT emerging as the most popular cellular LPWA technology. Mobile Experts expects NB-IoT to comprise 57% of the cellular LPWA category by 2022.

T-Mobile used the brand name “Magenta” for its NB-IoT offering when it launched the service in Las Vegas last year but interestingly, the company did not use that name in today’s press release nor is the name featured on T-Mobile’s IoT web page.