Home » T-Mobile Keeps it Simple with a New Attitude 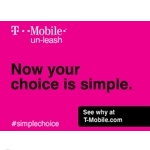 T-Mobile unveiled their new attitude today, the “un-carrier,” which they hope reverses their course of negative and slow growth. The core of their new strategy is no-contract wireless plans, the Simple Choice Plans, which they hope creates a sense of differentiation over national and regional wireless competitors. They have also begun their 4G LTE rollout and finally landed the iPhone.

No-Contract Plans
T-Mobile CEO John Legere used pretty colorful language when unveiling the new strategy at an event in New York City today. T-Mobile’s new strategy does away with contract plans, with a month-to-month plan of unlimited talk and text and 500 MB of data for $50. Unlimited data pushes the monthly fee to $70. Family plans are also available.

“These bold moves serve notice that T-Mobile is canceling its membership in the out-of-touch wireless club,” said John Legere, president and CEO of T-Mobile USA in a press release. “This is an industry filled with ridiculously confusing contracts, limits on how much data you can use or when you can upgrade, and monthly bills that make little sense. As America’s Un-carrier, we are changing all of that and bringing common sense to wireless.” Attitude!

Customers can bring their own compatible device, or buy one from T-Mobile. They are trying to break the device subsidization model by selling devices outright, or customers can get on a two year payment plan for the device. For example, T-Mobile will sell the iPhone 5 for $100 down and $20 per month for two years, for a total of $580. If customers leave before the two years is up, they need to pay the balance.

Full Court Press on AT&T
T-Mobile is gunning for AT&T, in the hopes they can convince millions of AT&T customers to defect and bring their devices with them. AT&T and T-Mobile run similar wireless networks, which is probably why there was so much emphasis on AT&T today.

“It’s a thousand dollars less for a T-Mobile phone over two years than on AT&T,” said Legere at the New York T-Mobile event.

T-Mobile is also rolling out 4G LTE, with initial market launches in Baltimore; Houston; Kansas City; Las Vegas; Phoenix; San Jose, Calif.; and Washington, D.C. Their 4G rollout plan calls for their LTE network to reach 100 million Americans by midyear and 200 million by the end of 2013.

T-Mobile is gunning for AT&T and other competitors, but it will also be interesting to watch the impact these moves have on traditional prepaid carriers.