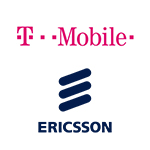 T-Mobile and Ericsson have signed a $3.5 billion agreement on 5G. Under terms of the multi-year T-Mobile Ericsson 5G deal, Ericsson will provide the carrier with 5G New Radio (NR) hardware and software that complies with 3GPP standards.

The deal, which will ease the transition from LTE Advanced to 5G, includes the vendor’s digital services solutions including dynamic orchestration, BSS and Ericsson’s Cloud Core. The agreement includes market ready hardware and software that spans all spectrums and will enable currently installed Ericsson 4G radio systems to run 5G NR technology via software downloads.

T-Mobile Ericsson 5G Plans
“We have recently decided to increase our investments in the US to be closer to our leading customers and better support them with their accelerated 5G deployments; thereby bringing 5G to life for consumers and enterprises across the country,” Niklas Heuveldop, the President and Head of Ericsson North America, said in a press release. “This agreement marks a major milestone for both companies. We are excited about our partnership with T-Mobile, supporting them to strengthen, expand and speed up the deployment of their nationwide 5G network.”

T-Mobile is not holding back on spending on nascent 5G technology. In late July, the company entered a deal valued at the same $3.5 billion figure with Nokia. The vendor agreed to provide T-Mobile with end-to-end 5G technology, software and services. Nokia also will construct T-Mobile’s nationwide 5G network, which will include both 600 MHz and 28 GHz capabilities.

Five months earlier – in February – Nokia, Ericsson and T-Mobile said that they would work together on the carrier’s 5G network. Plans include building out networks this year. Subscribers are expected to have access to 5G functionality in four cities — New York City, Los Angeles, Dallas and Las Vegas — early next year.

These announced deals almost certainly overlap. The overriding points are that there clearly is a lot of money pouring into the development and rollout of 5G and that Ericsson and T-Mobile are two of the major players as deployments begin.