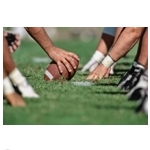 ¨Homegating¨ is replacing the ¨old school¨ pre-football game custom of tailgating: 70 percent of football fans, as projected from a statistically representative sample and survey sponsored by electronics retailer hhgregg, said they would rather get together with friends at home before and during televised football games.

In addition, one-quarter said they ¨homegate¨ at least four times during the NFL season.

The advent of new digital TV technology has been a key driver of changing social customs, hhgregg notes in a press release. “With new 4k-UHD curved televisions, you and your guests have a better view from the couch than the 50-yard line,¨ hhgregg VP of marketing, was quoted as saying.

The game itself, and hence homegaters’ TV set, takes center stage and serves as the quarterback during homegating parties, the retailer continued. The star running back, if you will, is food. Thirty percent of respondents said a new grill would be the one thing they want and need to upgrade their homegating parties.