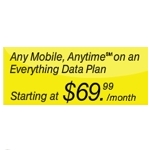 Looking to raise the bar on popular calling circle plans offered by competitors, Sprint launched Any Mobile, Anytime today. Any Mobile, Anytime allows unlimited mobile-to-mobile calling to any mobile phone in the U.S., regardless of underlying wireless carrier. Popular calling circle plans like those offered by Verizon, AT&T, and T-Mobile either allow unlimited calling within their own network, or require customers to designate specific numbers to include for unlimited calling.

The new Sprint plan is tied to their Everything Data plans of $69.99/month or more. Customers are required to subscribe to an Everything Data plan which offers unlimited texting, data, mobile browsing, and email to get the Any Mobile, Anytime plan.  “Recognizing that we are increasingly becoming a wireless world, Sprint is extending this offer to deliver what customers want: wireless freedom, for both voice and data. By offering unlimited calling to the people customers call most often – other wireless users –  cutting the cord becomes a viable choice for more people,” says Sprint in a press release.

It’s an interesting move. Any Mobile, Anytime is being used as bait to get more customers to sign up for wireless data services, the current growth engine for wireless carriers. The $69.99/month Everything Data plan includes 450 voice minutes. Sprint does outline some usage restrictions including roaming restrictions. Sprint says they can terminate this plan if over 800 minutes per month or a majority of a subscriber’s minutes/kilobytes of data are used while roaming.

Sprint is also hoping to entice more people to ‘cut the cord’ and give up wireline service for this new plan. “Any Mobile, Anytime provides unprecedented simplicity and value, so much that many more customers can now consider cutting the cord altogether,” says Sprint CEO Dan Hesse in a company statement.