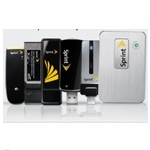 Sprint made several announcements today concerning the launch of Sprint 4G services. They identified Atlanta, Portland, and Las Vegas as Sprint 4G markets, scheduled to go live ‘some time in August.’ According to Sprint, Sprint 4G will “deliver peak downlink speeds of more than 10 Mbps and average downlink speeds of 3-6 Mbps.” Sprint is using Clearwire’s WiMAX network for the service. Sprint is the largest shareholder in Clearwire, owning 51% of the company.

The 4G options provided by Clearwire’s network make for an interesting situation. In addition to Sprint 4G, Clearwire will market the service, using the Clear brand. Cable companies will also market the WiMAX service, with Comcast first up, marketing their High-Speed 2Go service. That’s a lot of WiMAX options, from a single network, in any given market. Can all of those services co-exist in the same market, chasing the same subscriber base?

They’ll probably argue they’re not chasing the same subscriber base. Clearwire appears to be going after customers who want wireless broadband/data services, without costly and confusing voice plans tethered to it.  In that regard, it’s in Clearwire’s best interest to have a functioning and reliable wireless VoIP option, sooner rather than later. Cable companies appear to be positioning 4G as a value add to a wireline double or triple play subscription, offering a broadband to go option. Sprint may have the most trouble differentiating their product in the face of these other options. What’s their value proposition? They’ll have to be careful to not confuse the market.