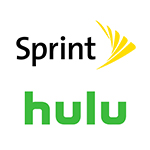 A Sprint Hulu deal, announced today, will include the over-the-top video provider’s Limited Commercials service at no charge for customers who purchase Sprint’s Unlimited service. Sprint is the third of the four major wireless carriers to make bundled moves on the video front as video represents an ever-increasing share of wireless network traffic.

The Hulu Limited Commercials plan normally sells for $7.99 monthly after a one-year initial deal of $5.99 per month, according to the Hulu website.

As Sprint noted in a press release, the Hulu service includes “thousands of hit TV series and movies,” along with “acclaimed” original content.

A Sprint spokesperson did not immediately respond to an inquiry about whether the company would obtain a discount on the Hulu service.

Sprint Hulu Deal
The Sprint Hulu deal is quite similar to one announced between T-Mobile and Netflix in September. That deal includes the Netflix OTT video service at no charge for customers on the T-Mobile ONE family plan with at least two lines. T-Mobile said at the time that it “didn’t get a big discount” from Netflix on the offering. Similarly, AT&T offers HBO for free with a subscription to one of their unlimited wireless plans.

Verizon obtained video and other content through its purchase of Yahoo and AOL, but doesn’t currently bundle a video product. Among the four national wireless carriers, Verizon held out the longest on offering unlimited plans. Will that now hold true for bundling video?

Both AT&T and Verizon have extensive traditional video operations, with Directv/U-verse and Fios respectively. They do offer bundled promotions from time to time, offering discounts on their subscription video service to their wireless subscribers. AT&T currently offers this for Directv /U-verse and Directv Now, but Verizon isn’t currently offering a bundled discount for Fios video (at least not that is nationally advertised).

Rumors also continue to circulate that Sprint might merge with a video services provider such as Charter or Dish – a move that could position the company to offer a mobile version of the merger partner’s offering that would be similar to what AT&T began offering when it launched DirecTV Now.