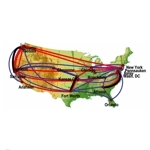 Sprint announced the launch of its Partner Interexchange Network (PIN), which allows its partners to directly exchange VoIP service between them while operating on Sprint’s IP network. Peering arrangements like this allow carriers to in effect ‘bypass’ the public switched telephone network (PSTN) and in Sprint’s own words, lower or eliminate “access termination fees and LEC tandem fees.”

Peering between IP providers is gaining noticeable momentum. IP peering basically allows a ‘community’ of service providers to set up their own network for the purpose of exchanging traffic, independent of the PSTN, although they typically interconnect to the PSTN. There are several well established peering organizations in place, including the Voice Peering Forum (VPF).

Sprint’s PIN uses a “… switchless routing framework based on Session Initiation Protocol (SIP), [allowing] minutes that cross the PIN architecture [to be] charged at a lower rate than traditional PSTN networks and drive down transport costs.” IP peering is a growing phenomenon that is enabled by the ongoing transition to IP dominated networks. This trend offers one glimpse into the future implications of IP networking.