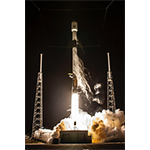 “This mission will push the operational capabilities of the satellites to the limit,” said SpaceX in a press kit fact sheet about Starlink. “SpaceX expects to encounter issues along the way, but our learnings here are key to developing an affordable and reliable broadband service in the future.”

Previously, SpaceX said it planned to deploy a total of 4,425 satellites to support its satellite broadband service.

According to a SpaceX press release, the company used a single rocket to launch the 60 satellites last week, later landing the rocket’s first stage on a droneship stationed in the Atlantic Ocean. Just over an hour after liftoff, the Starlink satellites were deployed at an altitude of 440 kilometers (km), about 273 miles. The satellites then used onboard propulsion to reach an operational altitude of 550 km, about 341 miles.

If SpaceX or its rivals succeed in delivering low-latency satellite broadband across the U.S., they will bring new competition to rural areas, potentially saving U.S. consumers as much as $30 billion annually, according to a recent report from BroadbandNow.