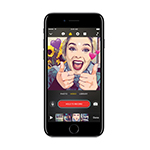 Apple has introduced Clips, a mobile app designed to make it easier for users to combine video clips, photos and for the first time, voice-produced animated titles to produce their own video shorts and share them on social media networks. The Apple Clips app supports 36 languages and serves as a testimony as to how far software developers have gone in bringing software tools once reserved for professionals to the online mass public. Using built-in Live Titles, users can create animated captions and titles using just their voice, Apple highlights in a news release.

Such capabilities were once reserved for professional-grade digital video production and editing software tools. That’s no longer the case. Clips come with dozens of pre-loaded music tracks, for instance, and they can be incorporated into online videos with the software automatically editing them to match their length.

Clips will be available on Apple’s App Store for free beginning in April. Running on iOS 10.3, the initial version is compatible with Apple iPhone 5  and later models, Apple notes in a press release. Support for the new, 9.7-inch screen iPad, all iPad Air, and iPad Pro models is to follow, as is Clips support for iPad mini 2 and iPod Touch 6th generation, according to the company.

The rapid rise of these video and photo sharing apps is a significant contributor to the growing bandwidth demands now placed on broadband networks. They will only multiply and so too will the implications on the network. For example, Apple’s next major move may be bringing augmented reality to the masses.