Home » It’s Slow and Steady as She Goes, as Xfinity Mobile Penetration Hits 2.4% 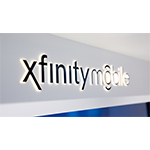 Comcast revealed Xfinity mobile progress today as they reported 1Q18 financials. Xfinity mobile subscriber counts are a closely watched metric, as they represent the cable industry’s progress in breaching the wireless industry, which is currently dominated by the four major national carriers, and a host of smaller regional carriers throughout the U.S.

Comcast added 196K mobile subscribers in 1Q18, bringing their total to 577K. The effort is not without significant cost. Comcast reported a net loss of $189 million attributed to their mobile efforts. But Comcast executives remain upbeat about their mobile prospects.

“We are pleased with the results so far,” noted Comcast Chairman Brian Roberts on their earnings conference call this morning. “Our offers are clearly resonating, adding value to our customers by bundling wireless together with access to our hi-speed internet at attractive prices.”

Roberts’ comments highlight Comcast’s approach to mobile. The conglomerate is positioning mobile as a value-add service to its home broadband service, aiming to create a ‘sticky’ broadband service serving both mobile and in-home needs. Xfinity mobile customers have to be subscribers to Xfinity in-home broadband.

“We believe Xfinity mobile is a big opportunity to continue to drive the bundling strategy of the cable business and provide more value to our broadband customers,” added Dave Watson, CEO of Comcast Cable on the call.

Xfinity Mobile Penetration
A relatively small number of customers have taken Comcast up on the offer so far. Considering the company has 24.2 million residential broadband subscribers, penetration is roughly 2.4% by my math. But as Comcast execs pointed out, it’s still real early.

Comcast expects Xfinity mobile penetration to ramp up significantly over the next few quarters. They are just getting going on the retail side, a critical component for mobile success. It’s also early with their BYOD promotion.

Comcast execs also referenced their recently announced partnership with Charter on a back-office mobile operating unit, which they claim should contribute significantly to scale and growing Xfinity mobile penetration.