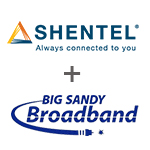 Shenandoah Telecommunications Company (Shentel)  has completed its deal to purchase the assets of Big Sandy Broadband, Inc., a provider of cable television, telephone and high speed internet services in Johnson and Floyd counties in eastern Kentucky.

Big Sandy, which has been in business for more than half a century, will add approximately 4,700 revenue generating units (RGUs) to Shentel’s cable segment, including more than 2,200 broadband RGUs.

“We’re pleased to have this opportunity to add Big Sandy’s solid network and customer base to our cable operations,” said Shentel executive vice president and COO Dave Heimbach said in a prepared statement. “This acquisition furthers our strategy to expand our footprint with the addition of quality networks in contiguous markets and we look forward to enhancing our coverage and service capabilities with an increased presence in Kentucky.”

Shentel has been aggressively expanding its business over the last year.

We reported in early February that the company had launched gigabit internet service, dubbed Shentel Powerhouse, in its Virginia markets. The Shentel gigabit news is a reminder of how providers increasingly see the availability of the service as table stakes as more customers need more speed for an increasing amount of streaming needs.

Also in early February of last year, we reported that the company closed a transaction to further expand its relationship with Sprint.