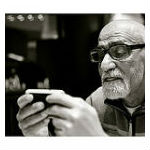 Collectively, U.S. seniors have been comparatively slow when it comes to adoption of high-tech devices. Yet when it comes to smartphones, a significantly higher percentage of seniors than younger Americans feel their smartphones represent “freedom” as opposed to being “a leash,” according to new market research from the Pew Research Center.

Eighty-two percent of surveyed U.S. seniors who own smartphones find them liberating. That compares to 64 percent of those ages 18-29, Pew Research’s Monica Anderson writes in an April 29 report. Thirty-six percent of smartphone-owning adults under 30 described their smartphones as a leash, double that of those 65 and older.

Along the same lines, a higher percentage of older U.S. smartphone users find their devices “connecting” as opposed to “distracting” when compared to younger age groups – 37 percent vs. 18 percent.

Anderson notes that, “Our survey did not directly ask why users chose the terms that they did, but differences in usage patterns may play a role. Younger adults tend to use their phones for a far wider range of purposes (especially social networking and multimedia content) and are much more likely to turn to their phone as a way to relieve boredom and to avoid others around them.”

Seniors and Smartphones Survey
Anderson goes on to point out that older Americans are less likely than their younger counterparts to have home broadband or own a mobile device. Just over a quarter (27 percent) of those 65-plus own smartphones as compared to 85 percent of 18-29 year olds, according to Pew Research’s “U.S. Smartphone Use in 2015,” a report released earlier this month. 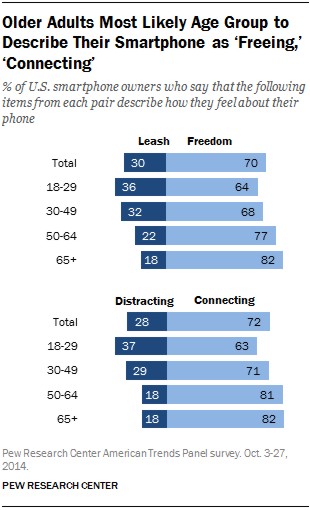 Despite the barriers old age poses to new tech adoption, Pew says older Americans are broadening their “digital experiences.” Last year, “for the first time, more than half of online seniors indicated they use Facebook,” Anderson notes.

Furthermore, seniors’ Internet use and broadband adoption continue to rise, and “the proportion of older adults who own a smartphone has increased by 8 percentage points since early 2014.”