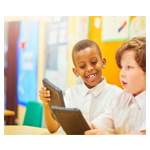 Broadband advocacy group EducationSuperHighway found in its annual State of the States report that 98% of public school districts in the United States have high-speed broadband. But 2.3 million students don’t have high-speed connectivity in their school, the school broadband report found.

The good news/bad news nature of the report was echoed in a comment by Evan Marwell, the Founder and CEO of EducationSuperHighway. “This year’s State of the States report clearly shows that state leaders have made extraordinary progress elevating the classroom experience for our kids,” he said  in a press release. “Despite the incredible success bringing high-speed broadband to our classrooms, we can’t stop here. Millions of students in school districts across the country still need us to prepare them to compete in today’s technology-driven world.”

School Broadband Report
Today, 44.7 million students and 2.6 million teachers in more than 81,000 schools have access. Since 2013, an estimated 40.7 million students have been connected to broadband and 21,600 more schools to fiber, the press release says.

The organization’s goal of reach 99% of K-12 students can be achieved, the organization says. Almost 2 million of the 2.3 million students who lack the FCC minimum standard of 100 Kbps per student are concentrated in 62 school districts. Almost 90 percent of these districts can upgrade to that standard without spending additional money.

Here are other highlights from the report:

The Education Superhighway school broadband report was release the same week that Cox released results of a survey about student broadband connectivity at home.