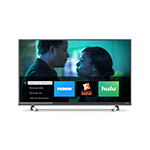 The company believes that the new OS enables it to more effectively fulfill its goal of eliminating the gap between free local broadcast HDTV channels and streaming. “These new features make the entertainment experience more enjoyable for our customers, while solving some of the biggest pain points when watching TV today,” Ilya Asnis, senior vice president of Roku OS at Roku said in a press release.

The new voice capabilities allow such things as verbal launching of streaming channels, switching of inputs and control of Roku TV. Other new features include TV Everywhere single sign-on and an updated 4K Spotlight channel. Roku provided the following details regarding the enhancements:

Smart Guide: An electronic program guide for Roku TVs that seamlessly integrates information for local broadcast TV via an antenna with streaming options allowing customers to search for, find and discover entertainment. The guide provides program information for local antenna broadcast TV channels from seven days in the past to up to 14 days in the future. Smart Guide also integrates the More Ways to Watch feature so users can see additional streaming options, such as: watch a movie or show from the beginning, see more episodes or browse similar entertainment. Over time, Smart Guide will even identify favorite broadcast channels available over-the-air by placing most viewed channels at the top of the program guide.

Roku Search for Over-the-Air Content: Local antenna broadcast TV options are now included in Roku Search results for Roku TV customers who use a TV antenna to receive free local broadcast TV. Roku search already spans across 500+ streaming channels and now, when a TV antenna is connected, will include results for local broadcast TV along with streaming options sorted by what is free or lowest cost for the viewer. Users can also search for antenna TV content via the Roku mobile app.

Voice Control: Roku TVs now feature voice controls to make it easy to switch inputs, tune to a local antenna broadcast channel, launch a streaming channel and more. Voice controls for Roku TVs can be used via enhanced remotes with the microphone button or through the free Roku mobile app for iOS® and Android™ mobile devices.

Private Listening for Over-the-Air Content: Roku TV users with an antenna connected to their TV can now use private listening to hear audio for local antenna broadcast content either using their mobile device via the Roku mobile app or through the headphone jack on the remote control on select Roku TV models. This feature is also available for streaming.

Roku OS8 will begin rolling out early this month to Roku players and to Roku TV models will beginning in November. The software update should roll out to all Roku devices by year’s end, according to the company.