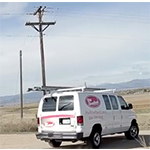 Despite increased interest in fixed 5G on the part of the nation’s largest carriers, it’s still not a great choice for rural areas, said Jeff Kohler, co-founder of rural broadband wireless network operator Rise Broadband, in an interview with Telecompetitor. In discussing fixed 5G vs. broadband wireless, Kohler told us he sees the relatively short range of 5G wireless as a disadvantage in rural areas.

“On the 5G front, what we’re seeing is a lot of high-frequency millimeter wave technology,” said Kohler.

In contrast, the broadband wireless technology that Rise is using can cover distances of up to five miles from a tower, Kohler said. “Using millimeter wave you would probably have to split [the signal] five to seven times using small antennas and repeaters to reach three to five miles,” he commented.

Fixed 5G Vs. Broadband Wireless
Despite Kohler’s comments, both AT&T and Verizon have talked about the possibility of using fixed 5G in rural areas.  But perhaps fixed 5G economics are not as challenging for those carriers as they would be for some other network operators because they likely would deploy 5G in their local landline service territories where they may be able to leverage existing copper and fiber assets for backhaul.

AT&T and Verizon both operate mobile networks as well and perhaps the carriers anticipate being able to use infrastructure deployed to support fixed 5G to also eventually support mobile services, thereby spreading the costs across both types of services.

Nevertheless, Kohler’s comments would suggest that 5G fixed wireless may not be the magic bullet for supporting higher fixed broadband speeds in the way that some people seem to see it.

Fixed LTE
What Kohler is enthusiastic about is fixed LTE wireless – the technology that supports what Rise calls “enhanced” service and which the company deployed in areas where it received funding through the Connect America Fund (CAF) rural broadband experiments program.

Currently the technology supports speeds up to 50 Mbps and according to Kohler “in coming weeks we will offer 100 Mbps to residential customers and we anticipate there will be high take rates.”

What really differentiates Rise’s service from other options, Kohler said, is “the consumption and data buckets we give customers.”

“We stay well ahead of the average,” he said.

In the rural areas that Rise serves, customers’ alternative options are likely to include mobile and satellite broadband — and neither of those offerings can match Rise on data allotments, according to Kohler.

Customers would have to pay Verizon $600 to get the same data capacity with Verizon’s mobile service that they get from Rise for $50, Kohler boasted.

Discontent on New York CAF Decision
Kohler reconfirmed Rise’s plans to bid in the reverse auction of Connect America broadband funding rejected by Verizon and some other price cap carriers. That auction is currently expected to occur in 2018, Kohler said. He noted that many of the rejected areas are near where Rise already does business, enabling Rise to gain synergies by leveraging existing infrastructure investment.

Some companies that might be interested in bidding in the CAF reverse auction were disappointed by the FCC’s decision to let the state of New York award up to $170 million in CAF funding that Verizon rejected for the state, Kohler noted. The FCC made the decision because New York agreed to award the funding in combination with a broadband funding program already underway in the state.

But as Kohler explained, the net result could be that New York network operators will get a higher percentage of total CAF auction funding than they would have received if New York had remained in the nationwide auction. The reason is that the nationwide auction plans call for funding to go to the carriers that agree to deploy service in an area at the lowest percentage of the support level originally offered to the price cap carrier. That would mean that if New York network operators were not among the lowest bidders nationwide, some of the funding initially earmarked for that state would have gone instead to other states.