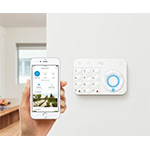 The do-it-yourself system, which now is available for presale, costs $199. It is available with professional monitoring and unlimited storage for a disruptive $10 per month price point, without long-term contracts.

“This Independence Day, we’re making home and neighborhood security affordable to everyone by freeing neighbors from long-term, expensive contracts with hidden fees,” Jamie Siminoff, the Chief Inventor and Founder of Ring, said in a press release. “With Ring Alarm, for just $10 per month, Neighbors can customize a comprehensive home security system that best suits their particular home and maximizes their security.”

Ring Protect Plus Plan subscriptions are $10 per month per location and include:

Integration with First Alert fire/smoke/CO2 equipment is available for $30.

Ring Alarm is a self-installation product. The base station and keypad connect through a home Wi-Fi network. The user installs sensors on doors and windows and places motion detectors. Like it’s video doorbell and other security platforms, Ring Alarm features smartphone alerts. The base station siren will go off and a central monitoring station will be alerted if anything is amiss. The system has backup and LTE cellular backup.

Additional products coming from the Ring platform include smoke and CO monitoring; flood and freeze sensors and a dome siren.

A recent Parks Associates’ report, “360 View: Residential Security,” found that 73% of 10,000 U.S. broadband households surveyed do not have security systems. The report, released in April, said that 19% of those without an alarm system are very likely to buy one if it can be controlled by a smartphone and 19% are very likely to buy a system if a long-term contract is not required.